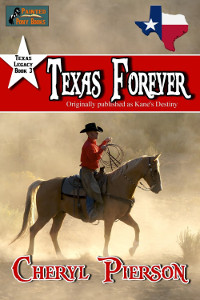 Texas Forever, originally published as Kane's Destiny, is the final novella in the ongoing story of Will Green and Jacobi Kane.

In the first book of the series, Red Eagle's War, Jacobi Kane rescues Will from a band of Apache who have kidnapped Will after murdering his family. Red Eagle's Revenge, the second novella, finds Jacobi Kane leading a band of lawmen on a mission to annihilate the remnants of the Apache renegades responsible for killing Will's parents and Kane's wife and children.

Now thirteen, Will carries doubts deep within about belonging to the Kane family. When his wealthy grandfather appears from Back East determined to take Will to Boston, Will learns the true meaning of family and just where he belongs.

With people and circumstances not always as they seem, Will and his grandfather face a life-and-death struggle. This time it's not Indians Kane must battle to save Will, but a man he would never have suspected. Can Kane bring Will and his grandfather safely through the fire of a treacherous plan to see them dead in order to fulfill Kane's destiny in Texas Forever?