Margarita and the Hired Gun 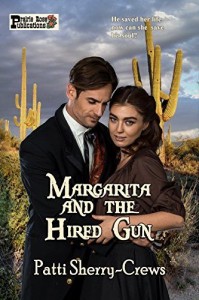 Pampered Margarita McIntosh is not used to being forced to do things she doesn’t want to do—but when her father, Jock, sends her away for her own safety, she has no choice. The long journey from Flagstaff to Durango tests her personal strength of will as never before, and the secret she carries in her saddlebag could be the death of her.

A rough Irish gunman, known to her only as “Rafferty”, is entrusted with getting her to her destination “safe and intact”—something he fully intends to do to claim the reward he’s been promised by Jock McIntosh. With a price on his head, the promised money is Rafferty’s ticket to a new life, and he’s not going to jeopardize that for anything—not even love.

But there are steamy nights and dangers all along the arduous trail for MARGARITA AND THE HIRED GUN, with deadly secrets between them that passion cannot erase. With her father’s enemies after her and the secret she conceals, will Rafferty’s protection be enough to save their lives? And will the heat of their passionate love be enough to seal their future together—if they do survive?