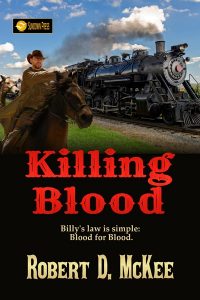 Billy Young boards a train with his brother, Frank, unaware that only one of them will survive the short, hell-bound ride. When a group of brutal outlaws led by a man called Blood begins to methodically shoot the passengers down, Billy finds a way to save himself with the sole purpose of avenging his brother’s death.

But as events unfold, in an unlikely twist, Billy discovers the outlaws are working for someone else—someone with much to gain from the deaths of certain people in the community. Frank’s murder sets Billy on the trail of the three men who changed his world forever—and he won’t stop until he finds every last one of them.

Once he tracks them down, he’ll exact his vengeance—and it will be a pleasure. He’ll follow them to hell and back with one thing on his mind…KILLING BLOOD!