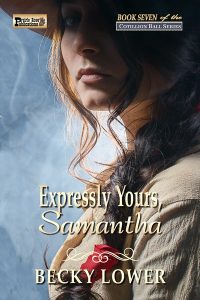 Wanted: Young, skinny, wiry fellows. Not over eighteen. Must be expert riders. Willing to face death daily. Orphans preferred.
With the death of her Aunt Hilda, Samantha Hughes is desperate to find a way to escape her Uncle Jack. The wanted poster for Pony Express riders just may be her way to freedom—death would be preferable to what Uncle Jack has planned for her! But can she pose as a man long enough to reach her eighteenth birthday a few months away?

Valerian Fitzpatrick is ready to be his own man—as a Pony Express rider! The weight of responsibility in the family business is not for him—a Pony Express rider will give him the freedom he craves. When he befriends fellow employee “Sam” Hughes, he figures out her secret, and friendship quickly turns to much more between them.

With Samantha still in terrible danger from her uncle, Val vows to protect her. But Samantha is determined to keep Val safe as well, and she’s on the run again. Can Val find her before it’s too late? And once he does, will he give up his life of freedom for the sake of Samantha’s love?