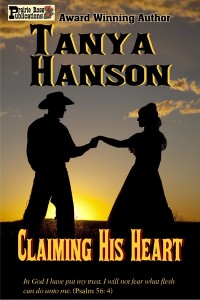 Caught between a noose and a gold mine cave-in, Tulsa Sanderson must do anything within his power to prove his outlaw brother’s innocence…even if it means marrying a gold miner’s daughter he just met. Tulsa needs every nugget and flake he can pull from beautiful Charmlee’s worn-out claim, but he sure doesn’t need a wife!

Charlotte Amalie lost her heart, her virtue, and her money to the last disreputable outsider who passed through her peaceful California valley months ago. She has no desire and no choice but to wed the handsome stranger who arrives, bearing a mysterious letter that will change both their lives forever.

Charmlee and Tull each have plans of their own. He’s set on raising quick money to save his brother’s life—a secret he isn’t going to share. She’s determined to leave the valley to find a new life for herself and medical treatment for her own brother. Marriage would put an end to the plans they’ve each worked so hard for, but is there a bigger dream for the future ahead that they can’t see? Trusting comes hard for them both, but Charmlee realizes it’s the only way to stake her claim on what’s really important— CLAIMING HIS HEART.

He lifted his Stetson. Hard fingers ran against his scalp, ending at his neck to ease the tangle of nerves. The lost childhood, his dead ma, still tore his heart in two. But he had a chance to redeem it all, to save his brother—if these twins didn’t get in the way.

Then Charmlee’s eyes turned as hard as her voice, and she lifted her chin to stare straight in his eyes. “All right. I’m forced to agree this letter isn’t a forgery. But that doesn’t make you who you claim.” She raised an eyebrow. “Any thieving cowpoke could have collected that general delivery post and sought me out.”

Her smirk irked him. “I am who I claim. Make no mistake.”

“Well then,” Charmlee’s gray eyes narrowed and her voice slowed like a freezing creek. “Just how far would Mr. Tull Sanderson go to inherit his ‘birthright?’”

“How far? I already come all the way from Texas.”

She raised her eyebrows, and sashayed closer. “I mean, Daddy’s left a proviso. A requirement.”

“I will do anything,” he vowed, blood racing. Each day wasted brought his brother closer to doom.

“You sure about that? Well, I won’t, Mr. Tull. Make no mistake.” She was close enough now to whisper but be heard.

“What do you have to do with anything? You aren’t his kin. You said so yourself.” Tull tightened his fists in impatience.

“It seems I am the key, Mr. Tull.” Suddenly her gaze turned elsewhere. He froze. Like she was hatching plans to run off before settling things. But then she turned to him with a voice full of trembles, flicking the letter at him. “That key to your birthright, as you said. According to Daddy’s wishes, you don’t get a thing unless you marry me.”