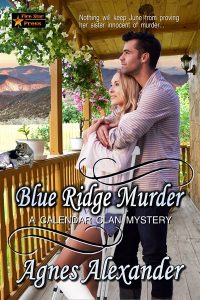 Wounded in a drug buy gone wrong, June March, a fledgling private detective, is forced to go home to her parents’ farm to recover. Her close-knit family is rocked when her ne’er-do-well brother-in-law, Roger, is murdered, after his part in a bank robbery. In the small community of Edison, North Carolina, nestled in the foothills of the Blue Ridge Mountains, secrets are hard to keep—even one as dangerous as murder. When June’s sister, April, is accused of killing her husband, June will do whatever she must to prove her sister’s innocence.

County Sheriff Jason Striker, an old school mate of June’s, is dead serious about bringing the murderer to justice. But how can he find the killer and keep June safe when she insists on being part of the investigation? Nothing has changed since high school—June is still as determined as ever, and she still has a firm hold on Jason’s heart.

June tries to hold old feelings at bay, but somehow, the boy from yesterday has become the man of her dreams—and she’s not about to let him go. With the killer still on the loose, Jason knows that June’s expertise will be invaluable in helping him solve the case—and she’s not about to back away from doing just that. Identifying the killer can mean the death of them both, as a small-town’s secrets protect one of its own…one who committed this BLUE RIDGE MURDER…