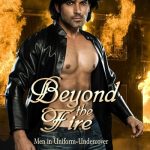 When Kendi Morgan witnesses an attempted murder near her home one stormy November night, she makes the only choice her heart will allow: she has to help the victim. But bringing the handsome stranger into her home traps her in the middle of a deadly drug war.

Wounded DEA agent Jackson Taylor is a man with nothing to lose and nothing to fear—until he falls for the beautiful woman who risks everything to save his life.

With his cover blown, Jackson knows he’s all that stands between Kendi and Benito Sanchez, a powerful drug cartel lord. Sanchez swears his vengeance, vowing to see Jackson and Kendi both dead.

Love comes fast when there may be only hours left…can it survive? Or will Jackson sacrifice his partner’s life—along with his own—in exchange for Kendi’s safety? Does a future exist for them BEYOND THE FIRE…