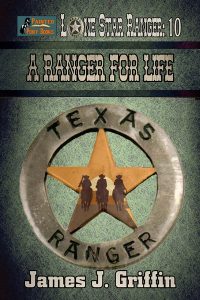 It’s been nearly two years since Nate Stewart’s family was murdered by a gang of evil marauders on the unforgiving Texas frontier. Shot and left for dead, Nate is rescued by a patrol of Texas Rangers who adopt him as one of their own. In no time at all, young Nate, a transplanted Easterner, becomes a full-fledged Texan and the youngest member of the Texas Rangers, guided by his friend, Hoot Harrison.

Now, the time has come for Nate, Hoot, and eight other young Rangers to prove their mettle in the most dangerous assignment of all. This newly-formed detachment of Rangers is being sent to flush out the many dangerous outlaw gangs plaguing west Texas—and bring them to swift justice. Not knowing what kind of danger they may encounter with the robbers, rustlers, and killers swarming over the entire Pecos territory, they’ve been told to expect some losses.

Caught in a deadly trap, it looks as if Nate, Hoot, and the other Rangers may not live to fight another day. Will they manage to escape the hail of bullets? With the gut-wrenching deaths of some of this tight-knit group right before his eyes, Nate has some decisions to make. If he survives, will this lethal battle change Nate’s mind about remaining A RANGER FOR LIFE?