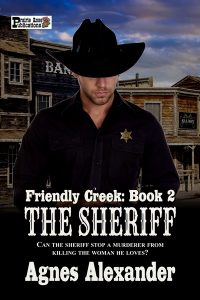 Friendly Creek Sheriff Buck Beaumont suddenly has his hands full when several strangers show up in his small town. Though this is usually a welcoming community, one of the newcomers, Sam Rayfield, doesn’t set well with sheriff, and Beaumont is not sure just why that is.

Those feelings become clearer when the town’s mayoral race takes off. Friendly Creek chooses sides between a well-respected, long-time resident and the smooth-talking Rayfield. It seems that Rayfield has more than becoming mayor as his goal—he also has marriage on his mind.

Wynona Murdock, the newly hired schoolteacher, revels in her new-found independence that comes with her job. But Sam Rayfield openly vies for her attention to the point of making her uncomfortable. Yet, how can she avoid him, maintain her independence—and stay safe?

With Rayfield’s subtle intimidation of the townspeople, Sheriff Beaumont gives him a warning he can’t ignore, and forces his hand. How does the arrival of these strangers connect them to one another, and to Rayfield? When murders begin to happen, it’s up to Beaumont to unravel the mystery and keep Wynona safe…or die trying.