Knight of the Red Rose: The Rose and the Sword 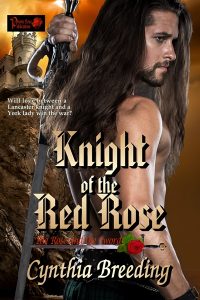 French emissary Stephen Picard arrives a day early in London to attend King Edward’s masquerade ball in order to get a feel for how much support there would be to restore the Lancasterian King Henry to the throne. Although he is on an official mission from King Louis to work on a treaty with England, secretly he’s on a double mission for his aunt, Margaret of Anjou, wife of the imprisoned King Henry. He just doesn’t expect to meet a warrior maiden dressed as Boudicca—a Celtic queen even more formidable than his aunt— at the ball.

Luciana Howard, daughter of the Duke of Norfolk and one of the Queen’s personal attendants, spots the handsome, mysterious man dressed as a pirate immediately, and wonders who he is. She recognizes him instantly the next morning when he is introduced to the English Court, and when asked, she is more than happy to act as the official scribe to the treaty talks.

Only, she isn’t just a scribe. She’s also been asked to spy on the emissary to make sure he does not secretly support Queen Margaret, who is in exile in France.

But spying becomes more difficult as she and Stephen are more and more attracted to each other, and she is torn between her duty to her York king and her love of a Lancaster knight. Can there be a future for Luciana and her KNIGHT OF THE RED ROSE?