Blood and Gold: The Legend of Joaquin Murrieta 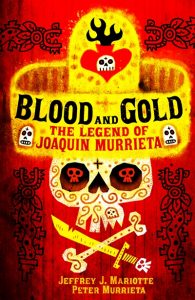 When Joaquin Murrieta’s older brother and cousin head for the riches of the California gold fields, he cannot resist the restless desire to follow. In a bold move, he convinces Rosita, the young woman he loves, to run away with him under cover of darkness. They follow the irresistible lure of the future they might grasp for their own in America, the land of dreams.

Instead, they face deep prejudice and explosive violence that leads to unspeakable tragedy, and forces Joaquin to set his sights on being a leader of men—becoming a legend, in the process. To make a place for himself and his people, he strikes back at the whites and the devastating, perpetual hatred they feel toward the Mexicans. Determined not to fail, to carve out a place in this vast land for himself and his followers, Joaquin Murrieta fights back with a stubborn will that is sure to win all…

But can he succeed? With his band of outlaws—and then, an army of patriots—he is determined to drive the Americans from the land that had so recently belonged to his beloved Mexico. It seems an almost unattainable achievement to some, but Joaquin cannot consider failure in this obsession.

With Joaquin’s brother murdered, and his band of renegades on the run, they must make their final stand and face Murrieta’s evil nemesis—cruel California Ranger Harry Love—who has been given carte blanche to do whatever it takes to kill Murrieta and drive his followers out of California for good. As the battle rages in a final showdown between Love and Murrieta, it’s kill or be killed.

Only one of them can walk away from BLOOD AND GOLD…

In BLOOD AND GOLD, award-winning author Jeffrey J. Mariotte and acclaimed TV producer/writer Peter Murrieta have joined forces to create a compelling blend of history, legend, and folklore. BLOOD AND GOLD is more than a richly detailed examination of the life and dangerous times of legendary California bandit Joaquin Murrieta. It's also a colorful, entertaining novel full of passion, violence, and adventure, a splendid retelling of those days in early California when men and women would do anything for gold.

"'Blood and Gold: The Legend of Joaquin Murrieta' is a reimagining of the iconic gold miner-turned-desperado, whose pursuit by California law enforcement and grisly fate as a preserved head displayed to scare generations of Anglos has inspired multiple books, songs, dime-store novels, murals and movies. Author Jeffrey J. Mariotte is an experienced Western writer, and his co-writer Peter Murrieta is a renowned Hollywood showrunner, so their 600-page novel zips through its action-filled saga with the vigor of Louis L’Amour (and with a hell of a plot twist at the end)."
— Los Angeles Times