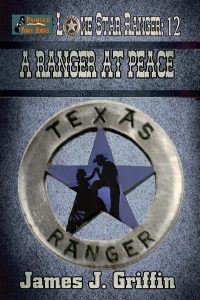 Texas Ranger Lieutenant Nate Stewart has been promoted and is now the commander of Texas Ranger Special Company G. His company has been given the formidable task of cleaning up Tascosa and the far northern reaches of the Texas Panhandle—a hotbed of crime and unrest between ranchers and homesteaders.

From the moment Nate and his men enter Tascosa, trouble seems to be everywhere they turn. They quickly learn not to expect much help from the townspeople, or even the local sheriff. Sitting on a powderkeg, Nate and his company must keep the big ranchers from blocking public roads and running the homesteaders off their land. Yet, the homesteaders are set on fighting the ranchers—even if it means their death.

In a final showdown with the MT Ranch owners, Nate faces down two fast guns in an effort to stop any more bloodshed. But will his ploy work? Can he hope to beat not one, but two of the fastest guns in the lawless area the Rangers have come to tame? Can there ever be peace, or will Nate give his own life in vain?

Nate’s mind and heart are distracted by beautiful Sonya Martinez, the daughter of a local restaurant owner. She’s proven she has the mettle to make a good wife of a Texas Ranger, but is Nate ready for marriage? Can he continue his work as a Texas Ranger and fulfill his dream of marriage to Sonya? A melding of hearts with the woman he loves and a final try at stopping the killings seem to be the only way he can, at last, be A RANGER AT PEACE…