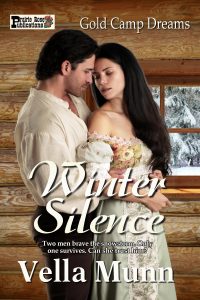 If she could, Carrie Walsh would live anywhere except Eagle Canyon, an isolated gold mining camp deep in the mountains of California. Forced into marriage by her father to a brute of a man, she has no choice but to do as her husband, George, has commanded. Two things keep Carrie from feeling despondent in this desperate situation—the rough, quiet loner known only as Nevada, who is George’s business partner, and the tiny life inside her.

Under sudden, questionable circumstances, Carrie becomes a widow. But what can she do to survive? The harsh winter has them snowed in, and she’s trapped. Though Nevada is suspected of murdering George, Carrie is still drawn to him, and he has vowed to make sure she and the child to come have a roof over their heads.

But Nevada has secrets and a past that haunts him. Can he dare to love Carrie—or hope she might love him? The truth about George could destroy Carrie—and eventually, her child. Nevada should run while he can—if he’s locked up, he’ll die. But this new feeling of wanting to belong somewhere, to be accepted, is something he can’t put aside. Is that dream worth risking his freedom and heart for in this deadly WINTER SILENCE?