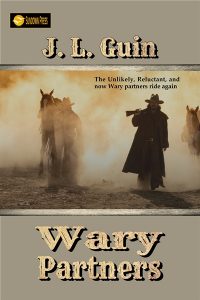 When Larry Creed shoots and kills a man in a saloon altercation, his father hires bounty hunters Judd Jacoby and Faye McJunkin to help prove his innocence. But with a saloon full of witnesses and Creed holding the smoking gun when the law arrives, the case seems to be open-and-shut.

Thomas Creed will not allow his son to go to prison—or hang—for something he knows he didn’t do. Larry is not a murderer. Can Thomas Creed convince Judd and Faye to take the case? There is one witness who has fled—a soiled dove, Lanie Brooks. She holds the key to Creed’s son being convicted of murder—or going free.

As Judd and Faye set off in search of Lanie, Creed tags along with them, determined to see his son gets a fair shake. Everything depends on Judd and Faye tracking Lanie down and convincing her to come with them to testify—or bringing her with them by force. Armed and desperate, Lanie could prove to be a bigger challenge than they ever expected.

Will Larry Creed hang for a crime he might not have committed? His life hangs in the balance, based on his father’s determination and the bounty hunters’ skill. How long can Lanie run from these WARY PARTNERS?