Up from the Deep (In a Flash) 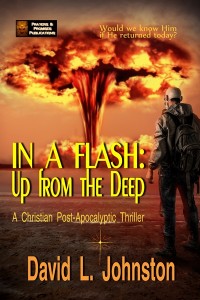 Six months after a catastrophic solar flare cracks the sky and bathes Earth in high radiation, killing much of the population and destroying most of humanity’s technology, the starving crew of the USS Colorado, a fleet ballistic missile submarine, is forced to surface and send a party ashore to forage for food. But instead of food, the sailors find a town in shambles, home after home filled with death, disease, high radiation, and bands of evil, violent men. Instead of food, the sailors discover the last thing they thought they would find—forbidden love.

Struggling with his Christian values and his desire to obey Navy regulations about fraternizing, Walter Jacks is blindsided by his own heart when he realizes he is falling deeply in love with smart and extraordinarily beautiful Seaman Sharon Parkers. The shore party’s mission, and Jacks’s grasp of reality, are further complicated when they find a mysterious young girl amoung the ruins—an adorable child with astonishing supernatural abilities.

While fighting to protect his shipmates, as well as his spiritual survival, in a dying world, Jacks is forced to face the question: Is the Bible true? If God’s Word is true, then where in the prophesy does His reality appear?

IN A FLASH: UP FROM THE DEEP is a riveting post-apocalyptic military thriller, the first in a series of truly epic scope from acclaimed author David L. Johnston.