Under A Western Sky 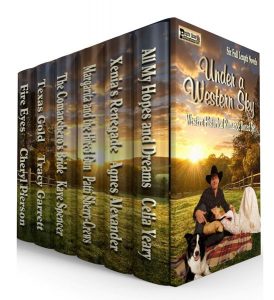 Where do the very best love stories blossom? UNDER A WESTERN SKY, of course! This fabulous boxed set of six tales of danger and romance are sure to capture your imagination as you are carried away to the old west. Handsome marshals, Texas Rangers, gunslingers, and wealthy landowners meet their matches with the daring women they happen to fall in love with, and you won’t want to put this boxed set down until you’ve read the very last story!

Authors Cheryl Pierson, Celia Yeary, Kaye Spencer, Tracy Garrett, Patti Sherry-Crews, and Agnes Alexander spin six incredible novel-length love stories filled with danger, excitement, and romance that will keep you turning page after incredible page until the very end. Saddle up and kick back for some excellent reading, as star-studded romance finds you UNDER A WESTERN SKY!

FIRE EYES by Cheryl Pierson
Beaten and wounded by a band of sadistic renegades that rules the borderlands of Indian Territory, U.S. Marshal Kaed Turner understands what the inevitable outcome will be for him: death. But Fate and a war party of Choctaw Indians intervene, delivering him instead to a beautiful angel with the skill to heal him. Jessica Monroe has already lost a husband and a brother to these outlaws. Can she afford to gamble with her heart one last time?

ALL MY HOPES AND DREAMS by Celia Yeary
To escape an arranged marriage, beautiful, proper Cynthia Harrington impulsively marries Ricardo Romero, a sensual Spaniard who ranches on the edge of the Texas frontier. She struggles to gain a foothold in the hostile household, determined to make a place for herself—but will she also find a way to make her husband love her?

TEXAS GOLD by Tracy Garrett
Texas Ranger Jake McCain is hot on the trail of a band of murderous outlaws when they ambush him and leave him for dead in the blinding snow. The last thing Rachel Hudson expects the blizzard to bring is a wounded Ranger with a pack of trouble. She and Jake have more than a powerful mutual attraction in common—the dangerous gunmen he’s been chasing intend to steal Rachel and her brother, Nathan. But Jake’s not about to lose the woman who means everything to him—Rachel, his TEXAS GOLD…(Previously published as TOUCH OF TEXAS)

THE COMANCHERO’S BRIDE by Kaye Spencer
Beautiful heiress Elizabeth White is exiled to Texas until she agrees to marry the prominent politico her parents have chosen for her—Grayson Beal. When Elizabeth is approached at a fiesta by dark-eyed, handsome Mingo Valderas, her heart will never be her own again. But Mingo has a reputation as a Comanchero—a man who is as fast with his knives as he is with his gun. Still, Elizabeth gives her trust to him, and their whirlwind courtship begins. Beal will stop at nothing to claim Elizabeth—and only one man can protect her. Elizabeth and Mingo stay one step ahead of Beal…but will that be enough?

MARGARITA AND THE HIRED GUN by Patti Sherry-Crews
Pampered Margarita McIntosh is sent away by her father for her own safety—from what, she’s not sure. The long journey ahead and the secret she carries in her saddlebag could be the death of her. A rough Irish gunman, Rafferty, is entrusted with getting her to her destination—for a reward—his ticket to a new life. But will Rafferty’s protection be enough to save their lives? And will the heat of their passion seal their future—if they do survive?

XENIA’S RENEGADE by Agnes Alexander
An urgent plea for help from a family member calls for action from Xenia Poindexter and her sister. But traveling west to save their uncle, a raid on a stagecoach way station would have seen them dead if not for handsome half-Sioux rancher, Ty Eldridge. Ty wants to protect Xenia from her uncle’s schemes, but he’s been burned in the past by love. Though others say they’re all wrong for each other, Xenia has never felt more “right” than when she’s in Ty’s arms. Is true love worth the chance of becoming XENIA’S RENEGADE?