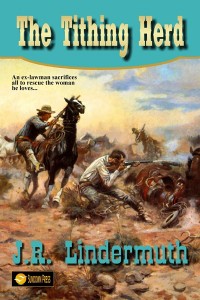 When ex-lawman Lute Donnelly sets out on the trail of the ruthless gang of outlaws who murdered his brother, revenge is his only desire. But when he stumbles upon Tom Baskin, a youngster who has been duped into helping the outlaw band and then left behind, Lute reluctantly takes the boy under his wing—and begins to find his humanity again.

United in a common cause, the pair travel a dangerous trail in search of revenge and redemption. But when Serene McCullough, the widow Donnelly loves, begs him to help her son move the cattle herd gathered by cash-strapped Mormons as their church tithe, he can’t refuse her.

When the cutthroat gang kidnaps Serene to bargain for THE TITHING HERD, Lute and Tom find themselves pitted against insurmountable odds—with unexpected help coming from an old friend.