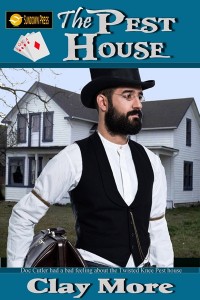 Nothing could ever damp down the smell of the pest house.

Especially not in the sweltering heat of summer.

It was a strange, stomach-twisting smell that wafted from the two chimneys that belched smoke most days when the place was full of patients. And even when the smoke was dispelled by the wind the odor hung like a miasma around the old two-storied timber building a couple of hundred yards from the edge of the town of Twisted Knee.

But the smell was only a prelude to the evil that took place in the old building that housed the wounded, the diseased, and the hopeless. Though Doctor Cutler had his own faults, murder was not one of them—and that was going to be the death of him…