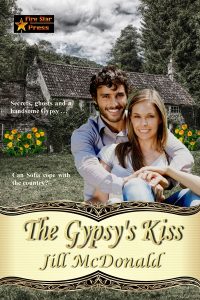 City girl Sofia Marchant has just inherited something she does not need—a country estate! A quick trip to settle up with her solicitors and get the once-grand Mere Hall up for sale turns into more than she’s bargained for, and she ends up staying longer than she intended—in spite of the cluttered mess, the damnable country quiet, and the ghost of Great-great Aunt Eleanor!

To top it all off, her handsome, well-built neighbour, Jake Hartley, seems determined to interfere—and so much more! Gypsy Jake, as she comes to think of him, has an irresistible way about him—but he also has his own secrets. Though Sofia prides herself on her fierce independence, she has to admit that she’s awfully glad when Jake comes to her rescue on more than one occasion.

When Sofia’s greedy ex-boyfriend, Edward, and Gypsy Jake meet up, it makes for an explosive situation—one that forces Sofia into making a decision that will affect the rest of her life.

The secrets of Mere Hall are slowly revealed, and Sofia finds herself growing strangely fond of the old place, the beautiful yellow roses, and of Great-great’s ghost. But everything is not as it appears, and Sofia must make a choice… Will she give up the familiar city and start a new life here in the country? Can she risk it all on THE GYPSY’S KISS?