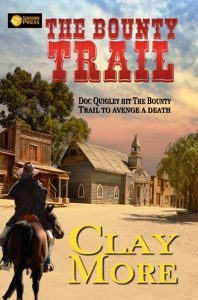 Doctor Marcus Quigley is a man of many talents. He’s a qualified dental surgeon, as well as a deadly bounty hunter. And he’s equally capable in both fields.

For years, he’s been working his way west, always on the move. His reasons for choosing such a lifestyle are deeply personal, and he can’t pursue the kind of life he’d envisioned for himself until he finishes what he’s set out to do.

A dear personal friend—his benefactress—was murdered years earlier, and he won’t stop until he’s found her killer. With few clues to go on, Marcus is sure he’ll know the man when he finds him—and he looks forward to the day when justice will be met. But in the end, will Marcus get his man? Or will the tables be turned in one last deadly gamble?