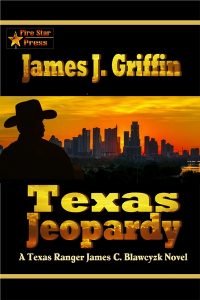 Texas Ranger Jim Blawcyzk lands in hot water when he kills a drug dealer in a shoot-out between the Rangers and a gang of modern day outlaws deep in the heart of Texas. But that’s only the tip of the iceberg as he uncovers the criminal connection between these same drug dealers and a slew of murders taking place across several Texas counties.

When the hit men come after him and his family, they get more than they ever bargained for—the fight is on, and Jim Blawcyzk is one Ranger who is determined to get his man, or die trying.

As a deadly shooter chases his wife, mother, and baby son through city streets, Jim takes the battle to him in the most personal way he can. A Texas Ranger to the bone, Jim Blawcyzk vows to protect and defend his family, friends, and beloved home at any cost, in this deadly TEXAS JEOPARDY…