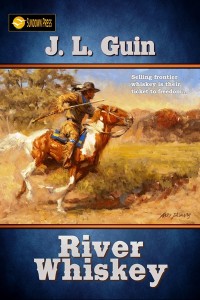 In a fiery accident, Eli Jenkins believes he has murdered Morton Crenshaw, the father of the girl he loves. When his friend, Whit, suggests they leave for California now, Eli is ready to go. The two young men “borrow” clothing and gear from the dry goods store where Whit has worked for many years, and light out on the run.

But their lives take a different turn when they become involved with seasoned traders, mountain men, Indians, and outlaws. Somewhere along the journey, the two tenderfoot greenhorns become men to be reckoned with—and, in their own right, respected.

When they return to Independence for Eli to own up to killing Angela’s father, Fate steps in again and turns their lives around. Will Eli claim Angela Crenshaw for his bride? Or will Whit and Eli head back on the rough-and-tumble trail West to chase their dreams of selling RIVER WHISKEY?