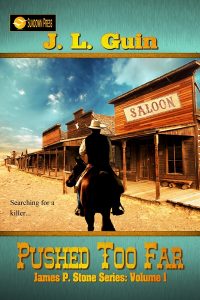 James Stone has been on his own almost all his life after the death of his parents early on. Kindly neighbor Eldon Greyson takes young James under his wing, making him a partner in his freighting business—until the fateful night when they’re robbed, and Greyson is murdered by “Laird” a mysterious man James vows to find and bring to justice.

Though years have passed, James has not given up on finding his mentor’s murderer. When he is caught in the middle of a train robbery, he sets out after the outlaws to recover the money they’ve stolen from him. Tracking them leads him to the small town of Eaton, where a bank robbery takes place minutes after he rides in.

With the town’s lawmen killed and wounded, Stone takes over temporarily, but all hell breaks loose with the arrival of Ike Langley’s gang of thieves—and James Stone finds he’s been PUSHED TOO FAR…