Promises on the Wind 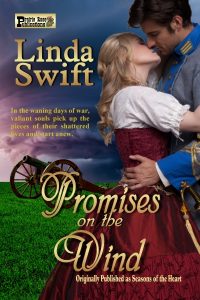 A Season of Miracles
Caroline Ross, a Confederate widow, desperately seeks medical help for her little son in the Union Army camp.

John Oldham, a soldier disowned by his family for choosing the wrong side, comes to her aid.

As they keep a vigil for days at Danny's bedside, a close relationship develops between them. John longs for a family and wants to make Caroline and Danny his own. Will his wish come true in this season of miracles?


• ♥ •
A Season for Love
Elizabeth Harper, a recent widow, is in danger of losing her home and livelihood to her late husband's brother who is claiming legal ownership.

Matthew Sutton, a homeless wounded veteran, takes on her cause when he agrees to become her husband to stop Fred Harper's takeover. Elizabeth and Matthew have no intentions of falling in love, but love happens. Can she convince him that she looks beyond his past allegiance and useless arm and loves the man he has become?


• ♥ •
A Season to Forgive
Enid Sutton is resigned to remaining single and caring for her dictatorial father in the aftermath of the Civil War. When Judge Sutton suffers a heart attack, Enid sends for his estranged son who returns and brings his new family with him.

Ben Taylor arrives to claim his deceased aunt's property and convert the mansion into a school for freedmen, but his plans go awry.