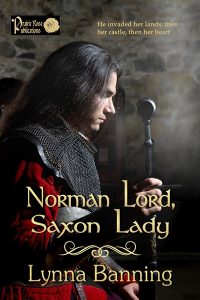 The Normans have arrived at the Saxon castle of Belven. Faced with the proof that her home and lands have been granted to Norman knight Alain de Chalus, Saxon Lady Edra of Belven knows she must surrender for the good of her people. On his deathbed, Lady Edra’s father startles her by encouraging her to work with the interlopers rather than offer resistance. Has he gone mad? How can he suggest such a thing?

Norman knight Alain de Chalus is proud of his standing as the new lord—but how will he be able to force the Saxons to work with him? The key, he realizes, is Edra—he must win her over, and that will be no easy feat. But time passes and love flares between them—and then the day comes when Alain’s bride, Henriette, arrives unexpectedly.

How can Alain remain faithful to the child-bride he barely knew before he left for war? How can Edra turn her back on the young woman who only wants a friend in this place that is foreign to her? When Edra is kidnapped by a beast of a man, Alain only knows he must save her—no matter what. Can there be a happy ending for this NORMAN LORD, SAXON LADY?