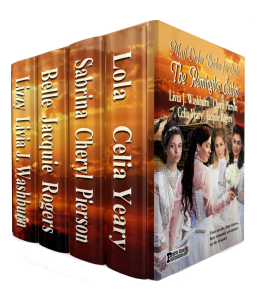 Brought up in the wealth and comfort of Eastern “old money” in staid and proper Philadelphia, the Remington sisters are forced to scatter to the four winds and become mail-order brides. In order to gain a fortune, their sinister step-father, Josiah Bloodworth, has made plans to marry them off in loveless marriages. Time is running out, and no matter what lies ahead in their uncertain futures, it has to be better than the evil they’re running from…

LIZZY: Livia J. Washburn
Elizabeth Remington’s world is turned upside down when she is forced to become a mail-order bride. With her cat, Fulton, Lizzy flees to Alaska—only to discover the man she’s to marry is not who she thought he was! Now, she must protect herself from the biggest danger of all—her own heart. Handsome Flint McKinnon has signed his soul away to her step-father, hasn’t he? He’s chased Lizzy across the continent, but can she believe him when he says he loves her?

BELLE: Jacquie Rogers
Belle Remington must marry someone before the dangerous Neville Fenster catches up with her. She hightails it out of Philadelphia to the wilds of Idaho Territory to become a bootmaker's bride, but when she arrives in Oreana, she discovers her groom has been murdered! Now, handsome, inebriated rancher Cord Callahan insists on fulfilling the marriage contract himself. Belle is beautiful and smart as a whip. But she has a secret. When Fenster shows up, can Cord protect the woman he wants to love forever?

SABRINA: Cheryl Pierson
Impulsive Sabrina Remington, the youngest, weds a man she knows her family would disapprove of. Though Cameron Fraser’s family owns a ranch in lawless Indian Territory, he’s made his way in the world with a gun, living barely on the right side of the law. With everything on the line as Bloodworth and his henchmen close in, will Cam be able to protect Sabrina from the desperate man who means to kidnap her for his own wicked purposes?

LOLA: Celia Yeary
Sensible Lola Remington, the eldest of the four sisters, must be certain the others are on their way to safety before she can think of fleeing Philadelphia herself. With the help of a local bridal agency, Lola finds the perfect husband for herself—in the wild countryside of Texas. Jack Rains owns a ranch and he’s in need of a bride—and children, of course! But just when Lola starts to believe there might be a future for them, she discovers a hidden letter from another woman…Jack’s first wife.