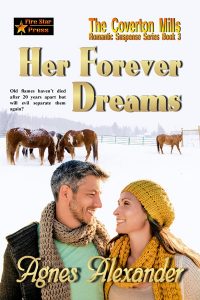 Handsome ranch owner, Seth Armstrong, has been trapped in a loveless marriage for too many years to count—until his crazed wife, Eve, decides to murder him and their son, Hunter. Though Seth had tried before to negotiate divorce, Eve has threatened him numerous times with keeping their three children from him—something Seth couldn’t live with. Now, he and Hunter have barely survived being gunned down by the woman he should have left years before.

During a separation when his children were young, Seth met and fell in love with Julia Halsey, a woman who understood Seth better than anyone, and loved him too much to see him hurt. She disappeared from his life once she realized Eve meant what she said—but Julia had no idea she was pregnant when she decided to uncomplicate things for the man she loved.

Years later, when Seth’s two sons’ paths cross in a most unlikely way, Julia comes back into his life again. But will their former lives apart—and the people they’ve known—allow them the happiness they so richly deserve after so many years of separation?

Someone is out to hurt Julia, her son, and even Seth and his family—but who? And why? Even though Seth and Julia only want to put their patchwork family together as one after all this time, someone is determined to keep Julia from realizing HER FOREVER DREAMS…