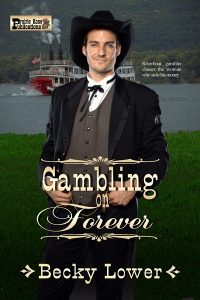 When half-Ojibwa Elise Lafontaine spies her father’s missing saddlebag with its all-important papers slung over the shoulder of a man boarding a riverboat, she follows him, hoping to retrieve the contents. Her plans come to an abrupt halt when she is declined entry to the boat, since she is an unaccompanied female.

From his perch on the top deck, handsome riverboat gambler James Garnett witnesses her denied entry. When she shoots him a look of desperation, how can he resist those deep blue eyes and beautiful face? Of course, he comes to her rescue, pretending she is his fiancée—and she is allowed aboard.

Begrudgingly, Elise accepts James’s offer of help to win back the saddlebag and the papers by having him play poker on her behalf, certain the thieving Confederate brothers who stole the bag will lose everything to James. But can Elise be happy with only the saddlebag and its contents? Or has she already lost her heart to the dangerous gambler?

After a sultry kiss, Elise steals his money and the papers and jumps overboard. Then the games truly begin. Now, Elise stands at the biggest crossroads of her life—will she go her own way, fiercely independent and alone? Or will she wager everything on the man who holds her heart--GAMBLING ON FOREVER?