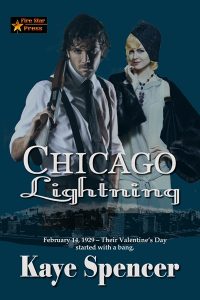 It didn’t take long for Ceara Galloway to realize she’d made the biggest mistake of her life in getting married. Her mobster husband, Eddie “The Roach” Rocchelli, has shown his true colors and hair-trigger temper in a beating that nearly killed Ceara, and now, she’s got to get away to survive. In a daring scheme to expose Eddie’s under-the-table bootlegging operation to the authorities, she steals the proof she needs and contacts J. Edgar Hoover.  Can this dangerous plan ensure her freedom and her safety?

Hagen Kane is the hand-picked one-man cavalry the Bureau Chief sends to rescue Ceara in a do-or-die mission. As Kane slowly infiltrates Rocchelli’s gang as an auto mechanic, he walks a razor-thin line, knowing at any moment his cover could be blown—and he and Ceara will both certainly be killed. When the time comes, they make a break for it, both realizing their plan has become more complicated—they are in love with one another. Escape has suddenly become more important than ever, now that there’s something to live for.

In a cross-country race for their lives, with Rocchelli and his gang hot on their tail, they must depend on every trick either of them has ever learned to survive—along with hoping for a healthy dose of luck on their side. Time is running out, and hope is running low.  Can Ceara and Hagen turn the tables on Rocchelli and his men in one final stand against CHICAGO LIGHTNING?