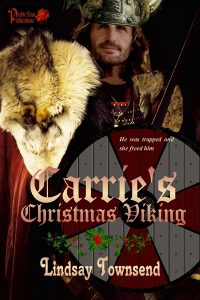 Bound by golden chains, the old statue of Eric the Viking protector had belonged to Carrie’s grandfather, and his father before him. Eric had always been a part of Carrie’s life, though she’d wished through the years that he was real—not just a statue.

But Eric had been imprisoned by magic spell dealt him by one of Carrie’s ancestors—a punishment for his own greed—until he truly understood what he’d done.

When Carrie’s ex-husband shows an unnatural interest in her modest little home left to her by her grandfather, Eric finally gets his chance at freedom. Who else can save Carrie from the ancient, wicked forces at work against her?

But will his protection be enough against the powerful evil they face in this present time? It’s his only chance to prove himself worthy of release from his centuries of imprisonment. He vows to love and cherish Carrie in his heart forever—if he can save them both. Though the dangerous dark powers threaten them, Carrie has faith. For at Christmas, anything is possible—even magic!