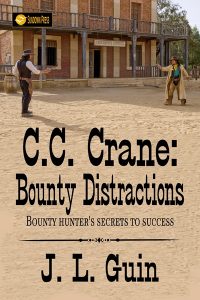 Hoping for a better life ahead, young C. C. Crane leaves Arkansas and heads west with no particular destination in mind. In Kansas, he lucks into his first job as a deputy sheriff under the seasoned sheriff of Sumner County, E.D. Johns, who shows him the ropes—and how to keep himself alive.

As their duties take them on a manhunt into Indian Territory, C.C. questions straying so far from their own county. Sheriff Johns is a dedicated lawman who isn’t about to let a border stop him from getting the men he’s after, and C. C. realizes he has the chance to make his own mark as a lawman if he can manage to keep dodging bullets.

When the sheriff is ousted from his position, C.C. must face a crossroads, as well. He accepts the position as a deputy U.S. marshal under Judge Isaac Parker’s jurisdiction in the most lawless area of the United States—Indian Territory. Then, after three years of dealing with the worst criminals in the nation, C.C. knows he’s ready to use his skills in another area of law enforcement—bounty hunting.

But C.C.’s decision to strike out after lifelong criminal Rudy Barrett could cut his bounty hunting days short—with a bullet. Barrett has been on the run since he was a teen, and he’s as mean as they come. With a long list of crimes to his credit—the latest a vicious murder—Barrett isn’t afraid of anyone. His reputation as a fast gun should have any lawman running scared…but not C.C. Crane. He’s learned from the best, and it’s time to bring Barrett to justice.