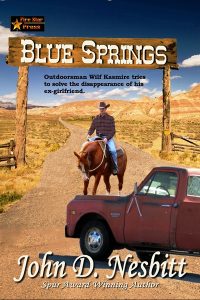 Wilf Kasmire is surprised to hear from his ex-girlfriend, Dawn Jenkins—and even more puzzled when she asks if she can stay with him “for a while.” The note of worry in her tone has Wilf agreeing—against his better judgment, but also wondering if she’s in trouble. Her stay with Wilf is cut short when she disappears without a note—and Wilf realizes he was right to be concerned.

When another young woman’s body is found nearby their small Wyoming town, Wilf knows he’s got to assure himself of Dawn’s safety. But as time goes by, the clues he finds tell him otherwise. Now, someone’s after Wilf, too, and he’s determined to discover if the would-be murderer is the same man who has abducted Dawn.

With little help from the local authorities, Wilf must stand alone against the man he believes is involved in a drug ring—a criminal who is likely responsible for at least two killings. A man who intends to murder Wilf, as well. But the need to know what happened to Dawn burns hot, and Wilf Kasmire is not one to admit defeat. Can he survive long enough to piece together the evidence he needs to bring the murderer down first? Nothing is certain in BLUE SPRINGS…