Addie and the Gunslinger 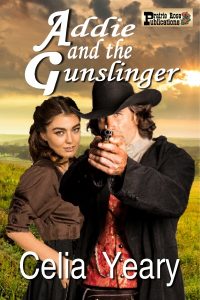 Ex-gunslinger Jude Morgan lands in jail in a far-flung West Texas town. On the fourth day, the sheriff ushers in a beautiful woman dressed in men’s pants and toting her own six-shooter. Adriana Jones claims he is her worthless husband who married her, but never came home.

The young woman makes a bargain with Jude in front of the sheriff. Jude is to come home where he belongs, and she will have him released. Once they’re alone, she explains his job is to pose as her husband to thwart the marriage advances of her neighbor, wealthy rancher Horace Caruthers. The older man wants her ranch to join with his; the Pecos River runs through her property.

To seal the bargain, Jude wants a kiss. During the next few weeks, however, Jude and Addie learn that the kiss meant more than they intended. Then, when Addie's life is in danger, will Jude rescue his Addie? Or will Addie save herself and her gunslinger?