A Restless Knight (The Dragons of Challon, Book 1) 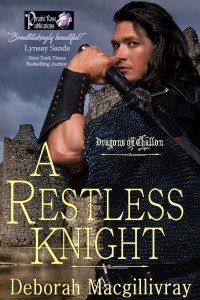 Had the music stopped, or had she just ceased to hear it? All she could do was stare into the dragon green eyes. Drown in them. This man was her destiny. Nothing else mattered. He removed the netting from her grasp and then dropped it.

Shaking, Challon took her face in both hands. The hunger in his eyes rippled, tangible. So strong, it nearly robbed her of breath. With a need, tempered with reverence, he took her mouth with his. Lightly at first. Then deeper, more desperate, more demanding. The primitive male desire to mate unleashed. Beneath it all was his need for her—in ways she knew he did not begin to understand.

She smiled. He would.

Lost in the power, Tamlyn was not aware of the hundreds of other people around them or their celebrating. To her, the world stood still, narrowed, until there was nothing but the star-filled night.