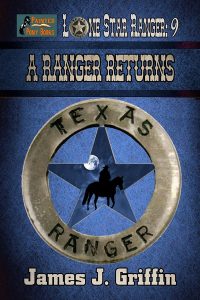 Nate Stewart and his Texas Ranger partners return to Austin from their grueling assignment in west Texas, expecting only a few days’ rest before they are sent back on the outlaw trail. Instead, they learn that the state legislature has refused to extend funding for most of the Rangers. All but a few have been given their walking papers—placed on indefinite furlough.

Forced to face an uncertain future without the Rangers, Nate and his best friend and partner, Hoot Harrison, travel to the land Nate still owns outside San Saba. With mixed feelings, the pair heads toward Nate’s family's ranch—now, where Nate’s parents and older brother are buried.

But when they reach San Saba, they’re met with guns and force. Someone is attempting to take over all the ranches in the area—including Nate's. Vowing not to lose the land his father had struggled so hard to tame, Nate is determined to unravel the plot—and the people responsible—for the hostility. The trail to the criminals, ironically, takes him back East—to his own home town of Wilmington, Delaware…and someone he’d have never suspected.

Once Nate confronts the man who means to take everything from him, he and Hoot waste no time in getting back to Texas. There, they’ll stand together once more against outlaw guns as A RANGER RETURNS…