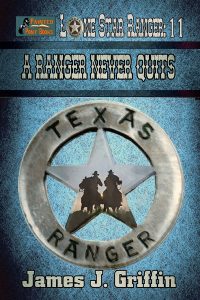 Nate Stewart has been a Texas Ranger for almost four years now. He’s no longer the scared fourteen-year-old orphan he was when a patrol of Rangers found him after his family was murdered—with Nate shot and left for dead.

Nate’s best friend and riding partner, former Texas Ranger Hoot Harrison, was crippled for life in a vicious gun battle. Hoot has married and settled down on the ranch Nate inherited, with both of them full partners. Now, unscrupulous land speculators are trying to steal the ranch from Nate and Hoot.

When Nate takes a leave of absence from his duties as a Texas Ranger to take care of some personal business, he discovers that the plot to swindle him and Hoot out of their ranch affects not only them, but other small ranchers in the area. But who can Nate trust to help them? Even some of the town’s lawmen are in on the scheme, and Nate and Hoot can’t fight them all.

In a final, deadly showdown, Nate must use all the skills he’s learned as a Ranger to save his home. One thing’s for certain<b>—A RANGER NEVER QUITS!</b>