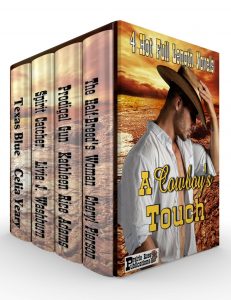 A cowboy's touch can heal anything—including lost love, hard times, and angry moments. In these four full-length novels, emotion runs high with the tingle of danger and the heat of love. There’s some wonderful reading ahead in this boxed set—and it all begins with A Cowboy's Touch.

In The Half-Breed's Woman, by Cheryl Pierson, U.S. Deputy Marshal Jaxson McCall goes after a young fugitive he’s been privately hired to track down, debutante Callista Buchanan. Heading into Indian Territory with a killer hot on their trail, Jax recognizes his old nemesis. Callie’s been set up to die—but Jax is not about to let that happen!

Kathleen Rice Adams has penned a novel in Prodigal Gun that was a recent finalist in the prestigious Western Fictioneers Peacemaker Award. With a timeless love that is rekindled after sixteen years apart, Mason Caine finds he will do anything to protect Jessie, his brother’s widow, and her daughter.

In Celia Yeary’s Texas Blue, rejected and abandoned by her father, Marilee Weston lets the pain of betrayal make her strong. Now she needs a way out of the forest, where she has lived for five years. Will an alluring stranger free her, or prove to be even more dangerous?

Spirit Catcher, by Livia J. Washburn, has a young woman finding the man of her dreams—a century too late. How can spitfire Dallas James manage to hold on to Boone Cantrell in her own time when he died over a hundred years ago?