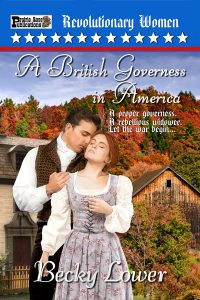 Eleanor Chastain has never left her hometown in Sussex, England. For ten years, she’s been a governess to the local earl’s young children, and now that the last of them has gone to boarding school, she finds herself unemployed. But the earl has other plans for her—a nephew of his in the fledgling country of America desperately needs a guiding hand for his five youngsters. Though Eleanor wants no part of America or the earl’s nephew, she has no choice but to accept the “offer” and set sail for the war-torn country.

Patterson Lovejoy’s wife died two years ago in childbirth, and chaos has ruled his household since that dark day. Though he’s glad to have Eleanor’s help, he begins to wonder if the peace of mind he has enjoyed since her arrival is worth the torment he is feeling as time goes by—and he finds himself falling in love with her. He can’t allow that to happen, since he feels responsible for his wife’s death. Marriage--ever again—is out of the question.

But with the deciding battles of the Revolutionary War approaching, can they take a chance on their love, after all? Will the war end their secret longing for what might be between them before they can admit their need for one another? When the battle hits their home and they are separated, Eleanor discovers an inner strength she didn’t know existed, and Patterson must make a decision he never thought he’d face.