Sarah J. McNeal is a southern belle in all the good senses of the word. Despite her quiet, gracious demeanor—or perhaps because of it—her wicked sense of humor sneaks up on folks all the time.

Sarah's stories overflow with the kind of hearth-and-home warmth that brings peace to the spirit. Her collection of stories about the Wilding family in the fictional town of Hazard, Wyoming, is beautifully evocative of life in the West.

A retired ER nurse, Sarah lives in North Carolina with her four-legged children, Lily the Golden Retriever and Liberty the tiny-but-feisty cat.

Do you write by the seat of your pants, or plot things out?

I confess, I’m a plotter. I need the structure of a plot line to keep the story headed in the right direction or I would be all over the place. Changes pop up from time to time or something doesn’t work out the way I hoped it would and I have to change it. And sometimes I get an epiphany that might even change the course of the events in the story. I love when that happens, but it means I have to rewrite the plot. I don’t mind the work. It’s all an adventure anyway.

What genre would you like to try writing, but haven’t?

How I would love to be a mystery writer. Solving crimes and finding the evil culprit is so enthralling, but I am too intimidated by the genre do it justice. It’s such a game of misleading the reader down wrong alleys, but keeping the clues and facts true without giving away the story.

What do you do when you get “stuck” while writing?

If it’s just the kind of stuck that comes from running your characters into a wall of some kind, I just take a “think break” and mull over the options of how to fix or change it.

But if it’s the kind of stuck that’s scary like writer’s block, well that’s a different animal. I have often seen and heard the misconception that writer’s block is just being lazy or that the writer has run dry of ideas (I’ve never met a writer who didn’t have stories rolling around in their minds), but neither of these conceptions is true. Some procrastination is involved, but it’s more like resistance when it comes to writer’s block because the author is afraid or has inner conflict. The fear can have different causes, but it’s mostly it’s about the fear of failure or success. I’ve had writer’s block twice. The first time was the worst because I didn’t know what to do. I was in the middle of writing Harmonica Joe’s Reluctant Bride. My plot was all laid out so I knew exactly where the story was going and how to get there. I’d worked up my characters so I knew them intimately. But everything just stopped. I couldn’t make myself write the story.

I needed help, so I took an online class through RWA on Writer’s Block. I learned to back away from the story and practice writing simple exercises, like describing fruit in a bowl, for only 10 minutes at a time.

Another exercise is to write stream of consciousness for five pages every morning, put the pages in an envelope without reading them. After a week, take out all the pages and read them and the truth will become clear. This exercise is great in discovering the inner conflict. I learned it in an Artist’s Way Workshop inspired by its author, Julia Cameron.

Apparently I have warmed to this subject because I’ve practically written a blog post here.

I’m a retired critical care nurse. I wrote even when I worked though. It was a great way to sooth my nerves after a long, intense day at work.

What was the most difficult thing you’ve ever written? Why? The Violin was easy as far as getting the story down in writing, but it was an intense emotional journey for me. The painful loss of my dad gnawed at my heart the whole time I was writing this story. I wept through most of it. My oldest sister was very ill and lived far away in Minnesota. I called her often and we talked about my book. She told me details about my grandfather McNeal’s house to help me get it right for the story. My sister became emotionally involved in the story, too. After she read the first draft, she told me it ended too soon, so I added a chapter at the end just to please her. I was so glad I finished The Violin and it went into its first publication just before she died. She died on the same day within the same hour as my beloved Golden Retriever, Kate. It was a time filled with grief for me.

Do you draw characters and/or events from real life?

I draw many of my characters and themes from real life. The Violin was inspired by the accidental death of my Uncle John before I was born. My dad told me so many stories about his brother, I felt like I knew him. I watched a baby grand piano as it went to intentional ruin in someone’s front yard and wrote Cast AwayHeart just so I could give it a decent burial and memorial in my mind.

There’s a bit of truth in every story I have ever written. I keep a pocket size writer’s journal with me everywhere I go. I have journals all over the place.

Pick one of your Prairie Rose Publications books. How did you come up with that idea?

Unexpected Blessings was inspired by a terrible news story of child abuse involving foster children and a male nurse I thought I knew so well and his live-in girlfriend. It was so disturbing to me to know someone and having worked beside him believing he was kind and good only to discover from the news he had a horrible dark side. I couldn’t get it off my mind until I wrote a story with a happy ending for those kids. 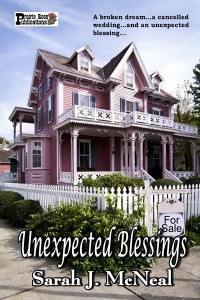 What convinced you to try writing fiction (or non-fiction)?

Does a writer really need convincing to do the one thing they were born to do? I have never met a writer who had to be convinced to write. They have all been driven by some internal passion. I believe it’s in a writer’s DNA to write lest the non-writer monster gobbles them up.

Do you have pets or other “writing helpers”?

Now you’re asking about my kids. Lily is my Golden Retriever. She hangs out on her special pallet, an old exercise mat, by my desk while I write. And then there’s the little terror of the house, my tiny six-pound cat, Liberty, who is 14 years old. She wants constant attention, especially when I’m trying to write, and it can be annoying. Once she stepped on the keys of the computer and deleted two pages of unsaved work. Still, she’s adorable. They love me when no one else does.

If you were stuck in a fictional story, what kind of character would you want to be?

This question is so easy. I would want to be Sherlock Holmes, the sociopathic genius who solves unsolvable crimes. He is a character so complex and intriguing, he continues to fascinate me to this day. I began reading the stories of Sherlock Holmes by Sir Arthur Canon Doyle when I was around 10 or 11 years old. For a while I pretended to be him and went around the house with my magnifying glass and bubble blowing pipe wearing Pop’s old trench coat. The only Sherlock Holmes story I solved on my own was The Hound of Baskervilles. I loved those stories. *sigh*

Do you have a hobby? How do you relax?

Besides numbing out with TV (that’s what happens to people who grew up without TV), listening to music, or reading, I like to play one of my musical instruments. I play the harmonica, guitar, violin, and bagpipes. I don’t play any of them well, but I love playing just the same. I also like to work in my vegetable garden. Earthy work has a wonderful way of smoothing out troubles. I have many other interests like pressing flowers and leaves and making something artistic with them like note cards, studying astronomy and looking through a telescope at the stars, making slides and using Pop’s old microscope to study tiny creatures and objects, and sewing. I especially like making unique covers for my meditation books. I collect PEZ dispensers, Netsuke, and tea pots. I also like to make jewelry with glass beads and found items. Well, there are other hobbies, but that’s probably enough for now.

If you couldn’t live where you live now, where would you live instead?

It would be very hard for me to leave North Carolina. I’ve lived here since I was five years old. The weather is perfect most of the time so I can enjoy all the seasons and there are so many things to do and see. I like that I can visit the mountains or the beach whenever I want. I have lived short stints in other places like Texas, Nebraska, and Washington D.C., but North Carolina is dear to me. If I had to move though, I would probably choose a small town back in Pennsylvania like Bloomsburg, Sunbury, or Catawissa. Both my parents grew up there so I’m familiar with the area. There are beautiful autumns there and it’s so peaceful.

If you won an all-expenses-paid vacation to the location of your choice, where would you go?

I’ve wanted to go to Australia since I was 18 years old. It’s so expensive to get there though. I came close once. I have a friend there I would love to visit. I can’t get enough of that unique Australian accent.

For more about Sarah and her stories, visit her website.