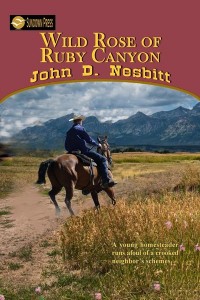 When Henry Sommers declines to take part in a neighbor’s swindle of branding and selling unbranded calves as their own, trouble stalks him. Henry only wants to be left to work his homestead claim and do his job on the ranch.

But there seem to be no hard feelings when Van O’Leary, the neighbor, asks him to look after his place while he’s gone on a business trip. Henry feels he must oblige—O’Leary’s wife, Dora, will be left alone and vulnerable. While O’Leary is away, Henry learns from Dora that her husband has a checkered past.

When O’Leary comes back, he makes insinuations about Henry’s relationship with Dora, even going further in trying to make a pass at Molly Chardon, a girl Henry has an interest in.

When O’Leary turns up dead, the question is…who killed him?

A nicely done traditional western with a hint of mystery and plenty of suspense. —Roundup Magazine

Plain English narrative and dialogue in accord with the historical period in which the story takes place; . . . hero and heroine with consciousness and conscience. . . a place that makes the reader walk where the characters have walked and recognize the land as being "right." —Wyoming Magazine