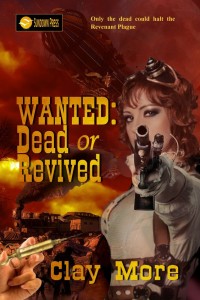 As the Civil War rages, Confederate Army surgeon Oscar Chamberlain uses his years of research to invent his Regen formula—a medicine so powerful it can promote healing at unheard-of speed. With this incredible discovery, he will revolutionize medicine, and hopes for the ultimate victory by the Confederacy.

But when a crude and tainted sample of his formula falls into the wrong hands, a devastating plague, more virulent than any other contagion known to mankind, is released. It spreads like wildfire, afflicting both armies, leading to cessation of hostilities between the North and the South in what becomes known as The Great Stalemate.

With Chamberlain being blamed for the Revenant Plague, both President Andrew Johnson and President Jefferson Davis agree that he must be found and brought to justice. Somehow, a cure must be discovered—or the entire country will become infested with the walking dead. In desperation, they turn to a medium and a ghost catcher to lead them to the man who is WANTED: DEAD OR REVIVED…