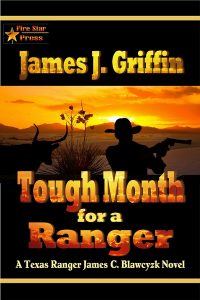 It takes one tough man to make it as a Texas Ranger, and Jim Blawcyzk certainly qualifies. But surviving this particular month has been full of trials he never expected—and quitting never entered his mind.

After single-handedly arresting a ring of murderous cattle rustlers he caught red-handed, his next case is something that affects him for weeks. When a mentally-challenged young man is shot down right alongside him after Jim has guaranteed his safety, it sends the hardened Ranger into a downward spiral of self-doubt. Only a few days later, he barely escapes death again in a violent West Texas dust storm while transporting three felons.

Things finally come to a head in an all-out race riot when a Tejano deputy sheriff is gunned down, allegedly by a young black man. It’s up to Jim to find out what really happened, and what secrets the murdered deputy’s partner—who happens to be white—is keeping.

Can Ranger Jim Blawcyzk get to the bottom of what really took place that night, before an entire county explodes in violence? He will—or die trying—because no matter how dangerous a situation might be, it's no match for a Texas Ranger determined to uncover the truth. no matter the cost.