To Trust Her Heart 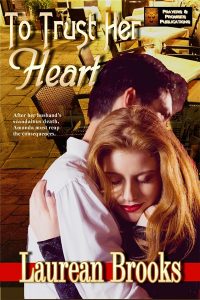 The scandal surrounding her husband's death and the debt he leaves behind forces Amanda Wilkes to seek employment. The experience strengthens her resolve to remain single. Then one touch from Jake Tyler, her new boss, leaves Amanda weak in the knees. Dare she trust her heart again?

Jake Tyler plans to remain unmarried and raise his seven-year-old-son after his wife's death. But his resolve teeters at one flash of Amanda's eyes. What lies behind his secretary's cool facade and why does she weep over sad love songs? Can Jake handle what he uncovers?

To complicate matters, an enemy crouches in Tyler Law Firm. What lies behind the plot to rid the law firm of the new secretary?

Originally published as A Decision of Trust