To Love a Knight 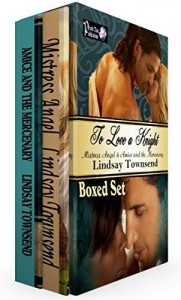 These two wonderful tales of Fourteenth-Century London will delight and entertain you to the very last page. While Isabella risks losing the love of her life in order to save her son in MISTRESS ANGEL, her friend Amice must guard her heart carefully to protect her own life, and that of the man she loves in AMICE AND THE MERCENARY. Court intrigue, dangerous liaisons, and passionate love await...

MISTRESS ANGEL—Isabella has been promised as a pawn to stop a blood feud from the time she was a child, but now her husband is dead, and she is at the mercy of his cruel family. When her young son, Matthew, is ripped from her arms and hidden away, she vows to do whatever it takes to save him—even though it might cost her everything. Stephen Fletcher, a handsome armorer, assures her that he will help her regain Matthew. Neither Isabella nor Stephen had thought to ever love again, but Fate has other plans for them...and by a chance meeting, their destinies are changed forever.

AMICE AND THE MERCENARY—Beautiful Amice, a spice seller, vows to avenge her brother’s death on a Crusades battlefield, while at the same time, trying to survive the English king’s court. When she meets charming Henry Swynford, she is reluctant to give her heart away until she can determine whose side he’s on in the deadly game of court intrigue—one false step could mean her life. Though Henry has secrets, Amice begins to trust him. Can their happiness last, or will their enemies tear them apart? What price revenge against true love?