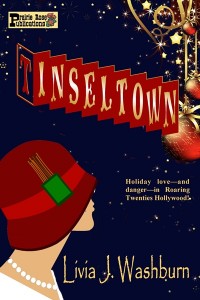 Carrie Fleming was on the run from a mysterious stalker. The young cowboy known only as Pecos found the last vestiges of the Old West in 1920s Hollywood. Fate brought them together at Christmas, when the only gifts that mattered to Pecos were winning Carrie's heart—and saving her life!

All she had to do was make it until Christmas...well, Christmas Eve, really...and then she'd be safe. Then it would be too late for her death to do anyone any good.

She kept an eye out for HELP WANTED signs in the windows of the businesses she passed. She wasn't sure why there weren't more of them. The economy was booming, after all. Some people said the stock market was just going to keep climbing. Businesses ought to be hiring.

Carrie glanced back again. The man was still there, but at least he hadn't come any closer. Maybe she was overreacting. Maybe he wasn't really following her at all. She turned her head to look at the sidewalk in front of her again...

And bumped right into a cowboy.

Who grabbed her and held on tight.