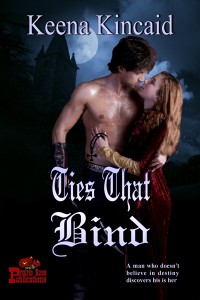 Five years have passed since young lovers Aeden ap Owen and Tess, Lady of Bridswell, parted—ripped apart by Tess’s mother. Now they are reunited in a twist of fate that could bring ruin upon both their families, far worse than the illicit love they shared in the past.

Sent north by the Plantagenet king to investigate rumors of treason and dispatch the troublemakers, Aedan discovers someone is murdering monks and stealing saints’ relics. And all clues point to the Earl of Carlisle. But Tess is present, posing yet another problem for Aedan—her uncle has promised her to Carlisle, a man she despises—and she has agreed. Aedan must discover what sway forces her to marry a man she loathes—and learn the desperate secret she hides at all costs.

A would-be usurper to the throne uses the stolen relics to amplify his power, wielding it like a weapon against his king, his country—and anyone who seeks to thwart his ambition. Meeting the traitor's black magic with magic of his own will prevent war, but will it also destroy Aedan’s chance to protect Tess and their last chance at lost love?

The evil at work is strong, and in the final climax of his battle against the dark forces, Aedan must make a choice between the two people who are dearest to him. There are some things even his Sidhe gifts can’t change—but ties that bind are forever.

The man stepped closer, peering into the coffin. After a moment, the nobleman’s anger eased, but his frown deepened. “Damn monk lied to me.”

Jasper glanced past the feretory door to the mound of brown fabric draped over the prayer stool, and then back to the remains at his feet. “How do ye ken that, m’lord? This man died hundreds o’ years ago. He should be less than bones and bits.”

The nobleman breathed out his impatience and worried a pair of gloves in his right hand. “This is supposed to be the crypt of Saint Cuthbert.”

The nobleman sighed. “I suppose a man who kills a monk cannot be expected to remember his catechism.” He paced outside the candles’ light. “Saints do not wither and rot. That is the first sign of sainthood. If this were Cuthbert, he would be fresh as the moment he last drew breath.”

Jasper scratched at the stubby remainder of his ear. Why would a saint no’ go to dust like the rest o’ Adam’s spawn? With a shrug, he dismissed the question and reached for the gold and coins at his feet.

“Stop. We are not here as thieves.”

“We came to steal the saint’s cup.”

Anger flared into the nobleman’s eyes and dimmed the glow of the tallow candles. “You have already lost one ear to thievery, do not risk your whole head. Push the slab back into place. ’Tis time for lauds, and I do not want to kill the entire brotherhood. We need the hermit’s prayer book to find Cuthbert’s true resting place, or at least learn which house pried the cup from his cold hands.”

“Then we need not worry over his soul if he refuses to tell us.”

The man’s smile would frost the sun. Turning away, Jasper reset the slab, although only the blind wouldn’t know the saint’s grave had been disturbed.

“After we retrieve the prayer book we go to Carlisle.”

“There is no saint in Carl—” Jasper stopped himself.

“No, there is no saint in Carlisle, but there is someone of equal value. My bride.”