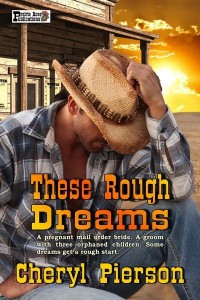 When Southern socialite Gabrielle Mason discovers she’s pregnant, she takes her future into her own hands. She has her family name to consider, and a husband is what she needs. She answers an ad for a mail-order bride in Indian Territory. But the man who proposes isn’t the man she ends up marrying.

Johnny Rainbolt is not a family man by any stretch of the imagination…but Fate is about to give him no choice. His late sister’s three children will be arriving on the next stage, and he has no idea what to do with them. When cultured Gabby Mason is left waiting for her prospective groom at the stage station, Johnny sees a way to solve everyone’s problems.

Some dreams get off to a rough start. A mail-order marriage is only the beginning. When one of the children is stolen, Johnny and Gabby are forced to depend on one another in an unimaginable circumstance that could turn tragic… or show them what might become of THESE ROUGH DREAMS.

Gabby hadn’t expected that kind of bluntness. Johnny could tell by the way she straightened, her spine automatically stiffening, her eyes widening for a moment. Why had he put it to her like that? Like he was doing both of them a big favor?

“You want me to marry you?”

She sounded as dumbstruck as she looked.

“I—hardly know how to answer…” Her gaze went past him to the window. Was she trying to figure out how to make an escape? Oh, no. She was too much the lady for that.

“Gabby, I—I’m sorry. I should’ve asked you in a better way.” He raked his fingers through his dark hair. “I didn’t mean that the way it sounded.”

At that, she smiled—a beautiful, wide smile that melted his heart on the spot.

“I appreciate honesty, Mr. Rainbolt—Johnny. I admit, today has been one surprise after another—what with discovering Mr. Maynard had passed on…and the…manner in which it took place.” She brought her gaze to bear on him, scrutinizing him, as if to determine how her words affected him.

He met it, head-on, with no hesitancy. She intrigued him, and everything about her drew him to her; the faint scent of honeysuckle, the beautiful rich silkiness of her auburn hair; the delicate slant of her facial structure. Her voice, though cultured, was warm with emotion.

“There’s one thing you may not have noticed—and I know you’re too polite to remark on, if you have,” he said, looking steadily into her dark blue eyes. “I’m half Cherokee. Out here, that’s not always a desirable thing among polite society…such as yourself…you bein’ full white, an’ all. I want you to know what you’re gettin’ into—if you say yes.”

That had been hard. He’d never let anyone make him feel inferior—but Gabby had to know that, from time to time, there were going to be snubs—and remarks would be made.

She lifted her head, a small smile on her luscious, delicate lips.

“There’s one thing you might be too polite to remark on—if you’ve noticed. And this may change your mind, Johnny Rainbolt. I’m three months pregnant—not always a desirable thing among polite society…”

For a moment, her voice faltered, but she went on, returning the same words to him that he’d spoken to her only moments before.

“I…want you to know what you’re getting into—if you still want to be married to me.”

It was in that instant, Johnny knew he had lost his heart to Gabrielle Eugenie Mason. There was no turning back for him, now.