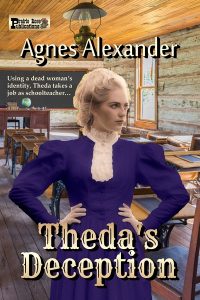 When her gambler husband, Farley, is killed, Theda Plunkett takes his winnings and leaves town to find a new life. Along with her newfound friend, Nellie Mae Culpepper, the two decide to head west for a new start.

But the train they’re traveling on is involved in a serious accident, killing one of their traveling companions—another woman who is also named Theda. Theda Morrison, the dead woman, was on her way to a teaching position in Montana—and Theda Plunkett decides to take her place, assuming her identity.

“Miz Morrison” and Nellie Mae arrive in Thornbrook Flats, Montana, to a mixed welcome. In a few short days, they’ve settled in and know this is a good place for them to make their home—but someone else has other plans for them. Theda and the town sheriff, Leif Cavanaugh, barely start a relationship when Theda’s life is threatened by an unknown person, and her house ransacked. But why?

Theda must make the wrenching decision to move on from the only happiness she’s known, and a future with the decent man she’s falling in love with—her past is sure to catch up with her. But can she outrun the person who is determined to see her dead? And will Leif be able to find her before she’s killed? Can Leif still love a woman who has kept so many secrets? Or will THEDA’S DECEPTION ruin their last chance at happiness?