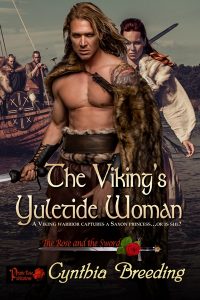 Ruthless Viking Prince Ivar is determined to avenge his murdered father—even if it means marrying a Saxon princess who will do whatever she can to escape him. Ivar and his men take over the Saxon stronghold of York, England, in the hope of forcing King Aelle to surrender. He holds Princess Aethelthryth, King Aelle’s daughter, as a prized hostage---or so he believes.

But the “princess” captive, Ella, is a lowly maid who happened to be in the wrong place at the wrong time. She bears a striking resemblance to Princess Aethelthryth who has been spirited away to safety. Ivar’s captain, Bronwolf, mistakes her for her mistress. Though he is attracted to Ella, Bronwolf turns her over to Ivar, as is his duty…but the fires of desire have already been kindled between the captain and the maid.

Ella continues her pretense of being the true princess in order to protect herself from the brutish Viking prince and his men, but her plan is turned on her when Ivar decides to make her his bride to seal the alliance between their people.

When Bronwolf learns her true identity, there is only one thing he can do to save her from Ivar’s fury at being duped—he must find a way to get her to safety. Can he protect Ella from the barbaric Prince Ivar, or will it cost both of them their lives? Will Ella consent to his plan and become THE VIKING’S YULETIDE WOMAN?