The Second-Best Ranger in Texas 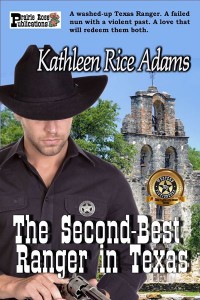 His partner’s grisly death destroyed Texas Ranger Quinn Barclay. Cashiered for drunkenness and refusal to follow orders, he sets out to fulfill his partner’s dying request, armed only with a saloon girl’s name.

Sister María Tomás thought she wanted to become a nun, but childhood dreams aren’t always meant to be. At last ready to relinquish the temporary vows she never should have made, she begs the only man she trusts to collect her from a mission in the middle of nowhere.

When the ex-Ranger’s quest collides with the ex-nun’s plea in a burned-out border town, unexpected love blooms among shared memories of the dead man who was a brother to them both.

Too bad he was also the only man who could have warned them about the carnage to come.

The bottle skittered away from Quinn Barclay’s fingers, teetering like a drunken cavalryman. Before he could coordinate a second grab, the tart in his lap lunged across the scarred tabletop and captured the all-but-dead soldier. She splashed the last of the watered-down rotgut into Quinn’s glass while he tugged the bodice of her dress even lower and nuzzled the top of a breast.

Sabrosa? Picante? Rica? What the hell was her name? Didn’t matter. The scent of roses came nigh to smothering him, but the Tejana was soft and warm and willing.

The grulla gelding beside Quinn snuffled at the overfilled glass, then curled his lip and shook his head, shuffling backward to plant his rump against the plank wall. Quinn chuckled against the dove’s skin. Bull’s-Eye never had been able to hold his liquor.

Bottle in hand, What’s-Her-Name tried to wiggle to her feet.

Quinn cinched her waist with one arm and snatched the bottle’s neck with the other. Raising the empty above his head, he waggled it at the bar. “Cal!” The gravel in his throat lent a growl to his tone. “Can’t have a proper wake without whiskey.”

The barkeep waved another Tejana to the back of the dim room. They huddled for a moment before the second dove—older, ridden harder, and trying to spill plumb out of what little she wore—sashayed over with a refill.

She stopped just beyond Quinn’s reach. “Cal, he says you can have this as soon as you take el caballo outside where he belongs.”

Quinn cut a glance at the corpulent cuss. Cal set to polishing the dingy mirror as though three hundred pounds of elbow grease would make a difference. “Darlin’, Bull’s-Eye belongs wherever I am.” He lurched for the booze.

Whipping the rotgut behind her back, the dove shimmied up against Quinn, molding her assets to his side as she leaned close and whispered. “But he cannot go upstairs with the three of us, guapo. The room, it is too small.”

Now that argument bore some ponderation. Quinn hadn’t quite sorted everything out when the batwings flapped open and a familiar form stalked in amid a swirl of El Paso dust.

The girl in Quinn’s lap shoved from his embrace and scrambled to her feet. Both doves flew, taking the firewater with them, dammit.

Quinn palmed his glass and slouched into his chair. When the jangle of spurs came to a halt, he squinted up at a wavering wall of Texas Rangers. A couple of hard blinks, and all but one disappeared. “Have a seat, Cap.” He pulled on an egg-sucking grin. “I’d offer you a drink, but you scared off the supply.”

Captain Jeffries arched a brow above a disapproving glower. “I think you’ve had about enough.”

“Not yet.” Quinn hoisted the oversize shot in a salute. “To the best damn Ranger in Texas. May he rest in peace.”

A hand clamped his wrist before the liquid reached his lips. Whiskey sloshed onto his vest.

He glanced down on a sigh. “Now, that’s a pure waste.”

“Get your ass up.” Captain Jeffries pried the glass from Quinn’s grip and hauled him from the chair, dodging a sharp clack of equine teeth.

Quinn grabbed for the gelding’s headstall, missing twice before his fingers hooked leather. “Sorry ’bout that. Ol’ Bull’sEye gets a mite peevish when he drinks.”

The captain’s scowl deepened. “You and that foul-tempered cayuse got thirty seconds to clear out of here before both of you wind up looking at bars from the wrong side.”

“Clear out and do what, Cap? Ain’t you the one ordered me to cool my heels?”

No, it wouldn’t, and so far whiskey and women hadn’t delivered the oblivion Quinn sought, either. Carousing wasn’t the same without Rodrigo Vega…and there wasn’t enough whiskey in Texas to drown the memory of his partner’s mutilated body.

Give this to Dulce. Sucking a breath through his teeth, Quinn rubbed the burning skin over his heart, beneath the Saint Michael medallion in his pocket. Take her away from San Miguel. And leave me a gun, amigo.

Who the hell was Dulce? In the five years they’d ridden together, Quinn hadn’t heard the name until the day Rodrigo died. The girl had to be a dove. Rodrigo knew no other kind of women.

San Miguel lay at the other end of a long, dusty ride, but Quinn had suffered enough forced confinement. He grabbed his Stetson from the table and dragged Bull’s-Eye away from the wall. The horse grumbled.

Quinn dropped the hat on his head. “Define close.”

Rodrigo had possessed sharp eyes, Quinn sharp ears. Together, they had made one hell of a team. He arranged his face in a reassuring smile. “Uh-huh.”

Well, that didn’t work. Jeffries settled into his hips, holding Quinn’s gaze until the smile threatened to collapse from fatigue. The captain presented his hand, palm up.

The corners of Quinn’s lips drooped. “What?”

“Your Warrant of Authority.” Jeffries flicked his fingers.

“I’m giving you a choice. Follow orders…or make room for somebody who will.”

Quinn tugged the proof of his Rangers commission from an inside vest pocket. “You take this, I’m gone.”

“I know.” Jeffries clamped the free end of the folded document between thumb and forefinger. “I’m hoping you’ll come to your senses and decide not to turn loose.”

As Quinn’s fingers tightened on the crumpled paper, the burn over his heart kicked up something fierce. He relaxed his hand, closing his eyes so he didn’t have to watch the only life he’d ever wanted slip from his grasp.

He shouldered past the captain and towed Bull’s-Eye toward the batwings.

The sharp edge in Jeffries’s tone followed him across the room. “Barclay—don’t get yourself killed.”

Quinn huffed a harsh breath. “I’m a civilian now, Cap. Save the orders for somebody who gives a damn.”